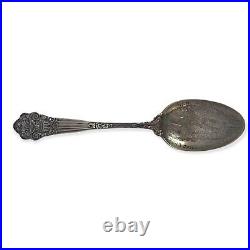 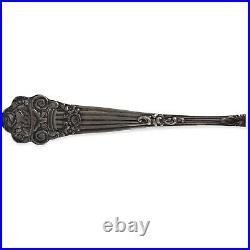 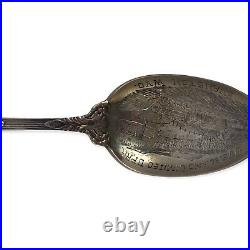 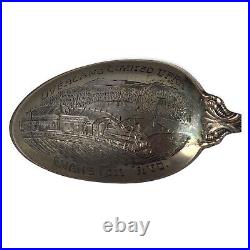 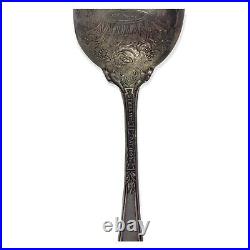 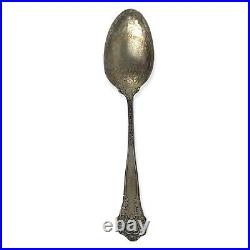 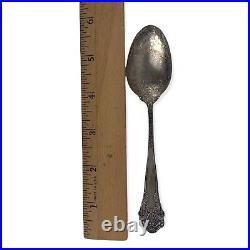 Antique 1908 Sterling Silver Souvenir Spoon. Hand engraved bowl, Overland Limited UPRR Union Pacific Railroad. Sterling silver, about 5-1/2 long. Very good condition, no monogram. From Wikipedia: The Overland Limited (also known at various times as the Overland Flyer, San Francisco Overland Limited, San Francisco Overland and often simply as the Overland) was an American named passenger train which for much of its history was jointly operated by three railroads on the Overland Route between San Francisco and Chicago. The Southern Pacific Railroad handled the train west of Ogden, Utah, the Union Pacific Railroad between Ogden and Omaha, Nebraska/Council Bluffs, Iowa, and east of the Missouri River to Chicago it was operated by the Chicago and North Western Railway as well as, for a few years starting in 1905, by the Chicago, Milwaukee, St. Paul and Pacific Railroad (the “Milwaukee Road”). The named service on this route began on the UP first as the Overland Flyer (188796) and then Overland Limited, and the SP began its own separate named Overland Limited train in 1899. The Overland name disappeared on C&NW’s portion of the route on October 30, 1955, from the UP in 1956, and finally ended on the SP’s portion as a separate year-round train on July 16, 1962 when that service was consolidated with the City of San Francisco. We store our items in a smoke free warehouse. The item “Antique Sterling Silver Souvenir Spoon Overland Limited RR Evanston Wyoming UPRR” is in sale since Friday, October 8, 2021. This item is in the category “Antiques\Silver\Sterling Silver (.925)\Souvenir Spoons”. The seller is “americanartifacts” and is located in San Pedro, California. This item can be shipped worldwide.