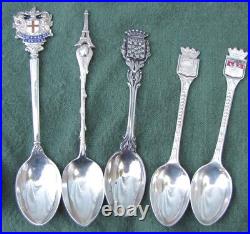 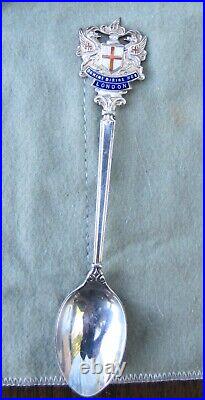 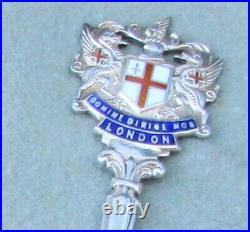 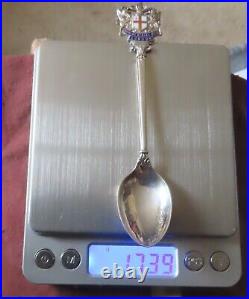 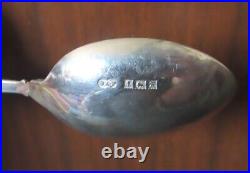 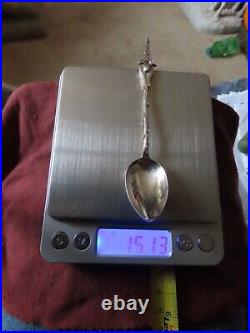 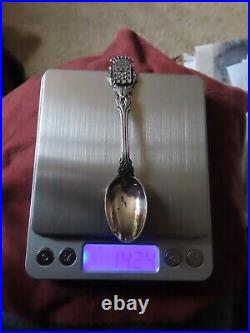 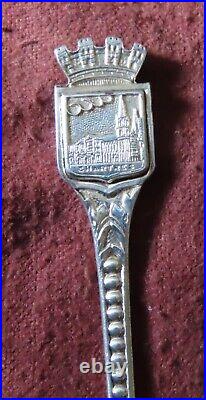 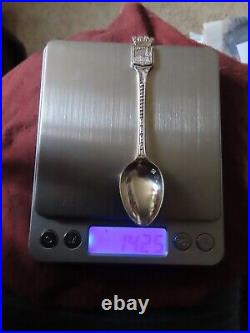 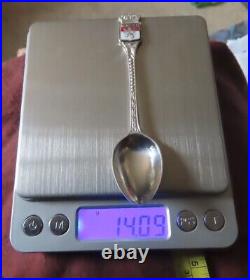 Antique sterling silver France Attractions- Set of Five Souvenir Spoons. Set of Five France Landmark Spoons. Shown Left to Right: London, Paris Eiffel Tower, Touraine, Chartres Cathedral, and. All in great condition accept Touraine has a nick on the bowl of the spoon. These are from the early 1950’s. Several have makers marks – but I can’t read them, so don’t want to claim which brand they are. Ondon – 5 1/4 tall. Weight – 17.39 Grams; Paris Eiffel Tower – 5 1/4 Tall. Weight- 15.13 Grams; Touraine – 4 1/2 Tall. Weight – 14.25 Grams; Chartres Cathedral – Tall. Weight- 14.25 Grams. Vendome- 4 1/4 Tall. Weight- 14.09 Grams. Total is 75.11 grams, or 2.65 Ounces. London – Features the London Coat of Arms. The armorial bearings consist of a shield on which the arms are displayed, a crest displayed on a helmet above the shield, supporters on either side and a motto displayed on a scroll beneath the arms. The arms consist of a silver shield bearing a red cross with a red upright sword in the first quarter. They combine the emblems of the patron saints of England and London: the Cross of St. George with the symbol of the martyrdom of Saint Paul. The crest and supporters came into use in the 17th century, but were used without authority until 30 April 1957, when they were confirmed and granted by letters patent from the College of Arms. The crest is a dragon’s wing bearing the cross of St George, borne upon a peer’s helmet. A primitive form of the crest first appeared in 1539 on the reverse of a new common seal. The Latin motto of the City is Domine dirige nos, which translates as “Lord, direct (guide) us”. It appears to have been adopted in the 17th century, as the earliest record of it is in 1633. Eiffel Tower, Paris France. The Eiffel Tower is a wrought-iron lattice tower on the Champ de Mars in Paris, France. It is named after the engineer Gustave Eiffel, whose company designed and built the tower. Locally nicknamed “La dame de fer”, it was constructed from 1887 to 1889 as the centerpiece of the 1889 World’s Fair. The Eiffel Tower reigned supreme as the tallest man-made structure in the world for about four decades. Without its antenna, the Eiffel Tower stood at a staggering 984 feet. An interesting fact about the Eiffel Tower: Its height changes with the seasons. If you’re visiting in summer, the tower is actually taller as the iron structure expands up to 7 inches when temperatures are as high as 104°F. In winter, the cold weather causes the tower to shrink up to 6 inches. Touraine – Features the Touraine Coat of Arms. Located in the Loire Valley wine region, Touraine is a beautiful wine district and AOC of France. This appellation is famous for its dry, white, and red wines rich in tannins. Chartres Cathedral -Also known as the Cathedral of Our Lady of Chartres, is a Roman Catholic church in Chartres, France, about 80 km southwest of Paris. Mostly constructed between 1194 and 1220, it stands on the site of at least five cathedrals that have occupied the site since the Diocese of Chartres. The cathedral was designated aWorld Heritage Site by UNESCO in 1979, which called it “the high point of “French Gothic Art” and a “masterpiece. Vendome- Features the Vendome Coat of Arms. Vendome is known for several famous attractions. The historic part of Vendôme is bordered by two main offshoots of the Loir, hence the nickname. On Square Belot, beautiful examples of floral frescos can be admired from the banks of the Loir River. The slope of the small gardens (“pente des petits jardins” in French) is the former name for Square Belot. The Water Gate (porte d’eau), dating back to the end of the 13th century, is a remarkable medieval structure spanning over a branch of the Loir River. The Islette Tower is located between Place de la Liberté and Carrefour des Rochambelles. The fortified tower was built in the 13th century as part of the medieval wall along the banks of the Loir River. Other prominent landmarks are Rue du change, St. Jacques Chapel, Place St. Martin, and the Rochambeau Statue, which honors General Marshal Rochambeau, whom fought in the American Revolutionary War with the Americans. This item is in the category “Antiques\Silver\Sterling Silver (.925)\Souvenir Spoons”. The seller is “mcgilkathe” and is located in this country: US. This item can be shipped to United States.