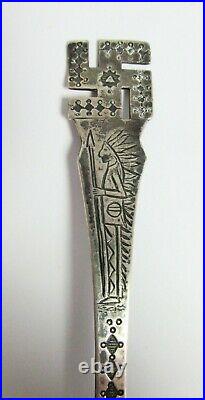 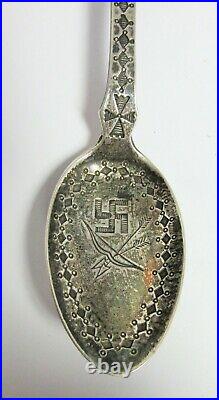 Being offered is an extremely rare, Navajo Indian crafted souvenir spoon. The spoon is from the Fred Harvey era of purchasing native goods during the early tourist trade to the southwest. The spoon has the symbol of a swastika, which where called whirling logs and symbolized good luck. The spoon also is adorned with the classic Harvey era die stamped native symbols. Before this symbol was hijacked, it was common practice to use this symbol on native Indian pottery, rugs, and jewelry, which would date this before the 1930’s. The spoon shows age, tarnishing, and wearing in places but is in good condition. 5 1/2″ long by 1 1/8″ wide. The earliest known swastika was seen about 10,000 years ago. The intricate pattern of joined swastikas was found on a late paleolithic figurine of a bird, carved from mammoth ivory, found in. The word’swastika’ derives from an Asian Indian Sanskrit word, in which the meaning of the swastika stands for universal welfare. “Swasti” means well-being of one and all and “ka” means symbol. The swastika is one of the most ancient of all symbols and used as a symbol for peace, life and good luck. It was a symbol of auspiciousness and good luck until the 1930s, when it was hijacked by the German. I find the taking of an Indian symbol despicable, and chose not to mention their name. The swastika motif is found in some traditional. Historically, the design has been found in excavations of. Era sites in the. It is also widely used by a number of. Tribes, most notably the. The Fred Harvey Era was during the start of the early tourist travel to the southwest, primarily started by the Santa Fe Railroad working with the Fred Harvey Company. Native Indians set-up stands and tables to sell their wares to travelers or those just having a rest stop while on the train. This started the demand for Native American Indian jewelry, pottery, and arts and crafts for the tourist trade. Fred Harvey set up hotels and motels along cities and train depots to service the travelers. Later, roads like Route 66 became the main travel route for vacationers, so tourist shops and trading posts sprung up all along the Mother Road (Route 66). In addition, I sell items for Native Americans and from personal collections. Please feel free to contact me with any questions about my items. Please let me know ahead of time. I will try my best to get the item out sooner. Thanks for your business. The item “Sterling Silver Navajo Indian Sawstika Whirling Logs Good Luck Souvenir Spoon” is in sale since Thursday, October 29, 2020. This item is in the category “Collectibles\Cultures & Ethnicities\Native American\ US\1935-Now\Jewelry”. The seller is “artpottery” and is located in Pueblo, Colorado. This item can be shipped to United States.