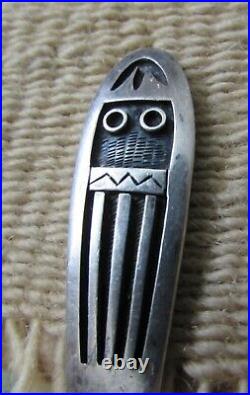 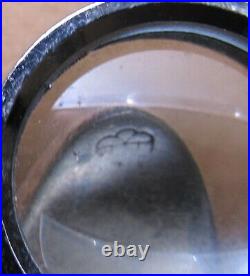 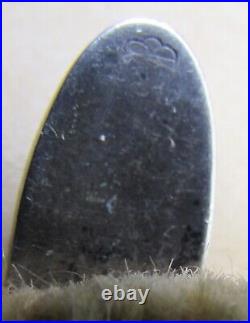 For your consideration we are proud to present this extremely rare sterling silver youth spoon by Victor Coochwytewa most likely retailed by Fred Harvey in the late 1940s. According to the famed Native American silver researcher Billie Hougarth, Victor Coochwytewa worked with Fred Harvey very early in his career and Victor’s earliest pieces bear a hallmark which has been hand-chiseled. Certain details indicate that the hallmark on this spoon has most definitely been hand-chiseled. The five raindrops are all of varying lengths and depths, with the second raindrop from the right even going through the cloud itself. The middle raindrop has barely even been formed! These details make the hallmark absolutely consistent with Billie Hougarth’s description. The design is characteristic of Victor Coochwytewa’s work with contrasting elements of hand-cut silver with darker oxidized elements in the background. We are not certain if this figure represents the snake dance, but we have seen other Fred Harvey Snake Dance spoons which have a similar figure with a square head. It could be that this spoon was made for an independent customer that was not affiliated with Fred Harvey, possibly a family friend of Victor Coochwytewa, but the highest probability is that this was a souvenir spoon made for the Fred Harvey shop. We might be able to pinpoint the years that Victor Coochwytewa actually worked for Fred Harvey with a little more time and conversations with experts in Hopi silver. We notice many silver items by Victor Coochwytewa that sellers believe were made in the late 1940s, but this spoon pre-dates them all. Our hallmark is completely hand-chiseled and is quite different from all the “one-piece-raincloud” hallmarks seen on all other silver items by Victor Coochwytewa. The spoon is hand-shaped and the bowl is slightly irregular which indicates no use of machine-aided design. The details in the silver overlay are all cut by hand. In fact, after many hours of research, we believe this spoon could very well be the earliest Victor Coochwytewa silver artifact yet discovered. We have not yet found an earlier piece. However, Billie Hougarth seems to have awareness of these early pieces because his description of the hand-chiseled nature of the raincloud hallmark is absolutely accurate. If anyone has knowledge of the Fred Harvey era pieces made by Victor Coochwytewa, or has relevant information from any other book on the history of Hopi silversmiths, we would be very grateful. The spoon measures 5-5/8th inches in length, and we believe it to be a youth-sized spoon for a child. The wear to the tip indicates that someone used this spoon quite frequently. The design is quite well-executed, and it shows that Victor Coochwytewa was very talented even in the earliest years of his career. To say that the work of Victor Coochwytewa is highly desirable is an understatement. Both museums and advanced collectors of Hopi silver actively seek the work of Victor Coochwytewa, an important artist designated a “living treasure” along with two other Hopi elders in 1994. Similar to the work of Charles Loloma, another famous Hopi artist, forgeries have appeared on the market due to the overwhelming desire of collectors desperate to possess a single piece. However, in this case, there is absolutely no question as to the authenticity of this hand-made spoon. Whether you are a museum curator or a collector of the finest Hopi silver objects, we know you will enjoy this piece for years to come. We appreciate your kindness, and thank you for your continuing support. The item “1940s Antique Victor Coochwytewa Hopi Fred Harvey Era Sterling Silver Spoon” is in sale since Monday, August 9, 2021. This item is in the category “Antiques\Silver\Sterling Silver (.925)\Souvenir Spoons”. The seller is “twangermanagement” and is located in Nashville, Tennessee. This item can be shipped to United States.