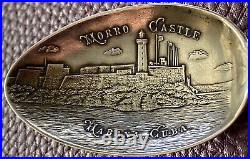 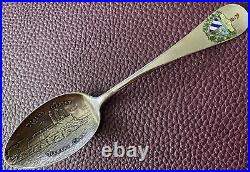 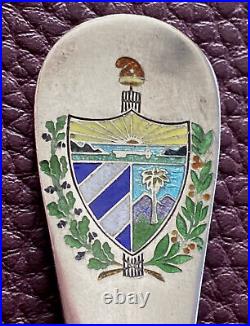 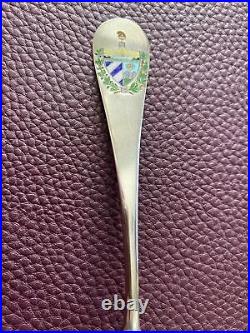 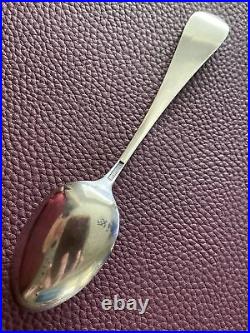 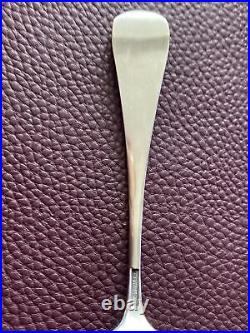 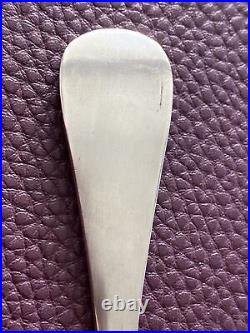 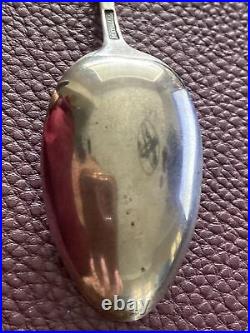 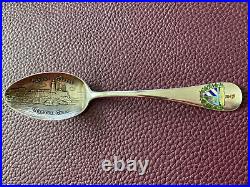 Morro Castle Habana Havana Cuba 5.75 Sterling Souvenir Spoon by Watson. Handle features the Coat of Arms for Cuba in enamel colors. Bowl features an image of and “MORRO CASTLE HABANA, CUBA”. Sterling Silver by Watson. Measures about 5.5 inches long. Weighs about 21.7 grams. Very nice Estate condition (see photos). The coat of arms is a symbol of the nation that is formed by two arches of equal circles, cut turning concavities to each other, as in an ogival shield. It’s split at two thirds of its height, where a horizontal line divides it. It consists of three spaces or fields: the top represents a sea, on its sides, right and left, opposite to each other, two capes or points of land, between which, closing the strait they form, extending from left to right, a key with a thick stem, its ward down, and for its background a rising sun with its rays extending throughout the sky of the landscape. In the lower space or field to its left lie five bends, placed alternately, of the same width, of the colors dark blue and white, blue one being the highest, and all slighted from left to right. In the lower space or field to its right, the figure of a landscape representing a valley, in its center rises a royal palm tree, with the bud of its middle leaf being the highest, standing upright, for its background two mountains and clear skies. The shield is supported by a bundle of sticks, its lower end tied with a red string crossed in saltire, protruding from below the point of the shield. Above, protruding from the central part of the shield, is located a bundle of sticks tied together by a red circular string. The crown of the bundle of sticks is covered by a Phrygian cap of the red color turned right, and is sustained on one of the sticks slightly protruding. In the central part of the cap is a white five-pointed star, one of the points up. Not surpassing the rightmost and leftmost points of the arches of the shield, two branches, with their respective fruit, bordering it, one of laurel to the right, and one of holly oak to the left, facing it and crossed in the lower end of the shield, behind the bundle of sticks. This item is in the category “Antiques\Silver\Sterling Silver (.925)\Souvenir Spoons”. The seller is “paagui_4168″ and is located in this country: US. This item can be shipped to United States, Canada, United Kingdom.